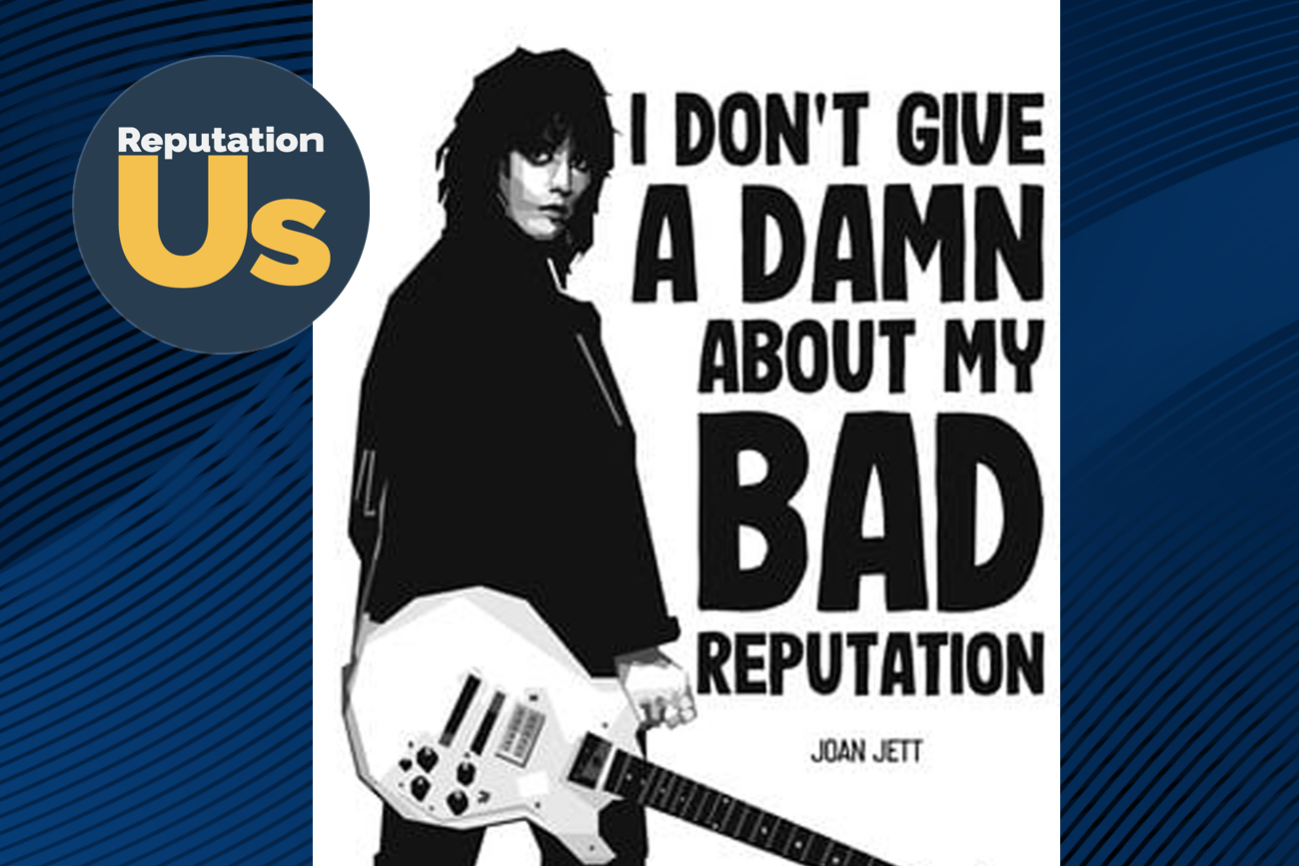 “An’ I don’t give a damn ’bout my reputation. The world’s in trouble, there’s no communication!”

Joan Jett famously sang candidly about not giving a damn about a bad reputation. Financially speaking, it worked for her image, sold albums and made her famous. But ‘80s rock stars aside—a bad reputation will generally cause a financial hit more than a gain.

According to a widely cited study by the World Economic Forum, reputation accounts for more than 25 percent of a company’s market value. By 2019, a global survey of 2,000 executives put that share at 63 percent. That’s a terrifying statistic in the context of Warren Buffett’s notable quote that, “it takes 20 years to build a reputation and five minutes to ruin it.”

Reputational damage is the realization of any source of reputation risk facing an organization (or an individual) that causes a negative shift in perceptions from a stakeholder group. This may be linked to a company’s actions, performance or communications. Reputational damage generally results from a gap between what a company says—and what it is perceived to have done, or not done. This can encompass regulatory breaches, executive misbehavior, employee indiscretion, cyberattacks, and negative consumer reviews, including social media posts.

In April 2020, Texas ice cream maker Blue Bell Creameries paid $60 million to settle a derivative shareholder suit related to a deadly 2015 listeria contamination. Blue Bell’s revenues and stock fell, and Delaware’s Supreme Court stated that since product safety is essential to the company’s business, the board’s duty extends to safety oversight. The case illustrates how reputation risk has migrated from a marketing issue, to a solid financial risk.

It’s no surprise that bad reputation comes at a cost. But how do you tally the total? Here are four steps to consider:

One of the easiest effects of a bad reputation to quantify is financial. Reputational risk can pose a threat to any company, from the smallest to the largest best-run companies, with the potential to wipe out millions (or even billions) of dollars in market capitalization or potential revenues. On a financial statement this looks like:

The actual financial impact of a bad business reputation is obviously impossible to pinpoint given company diversity, but one Vision Critical estimate suggests it’s more than $537 billion in the United States alone. Your balance sheet can tell you the precise cost of damage to your reputation as impacted by a situation, while the fall of share value will tell everyone else how hard a poor reputation is hitting you.

For small- and mid-size businesses, social media and online commentary can have a significant financial effect. The Harvard Business School studied the impact of a one-star increase in a restaurant’s Yelp rating and found it led to a five to nine percent increase in revenue. If a company jumped from a one-star to a three-star rating, they could experience an increase in revenue of 18 percent. This means a restaurant with $1 million in annual revenue and a poor reputation may have $180,000 of lost opportunity.

Construction companies—tied to word-of-mouth reputation—are particularly vulnerable to reputation problems. One example puts a hard number on the cost of a negative reputation:

A single customer making defamatory statements on Yelp and Angie’s List online against a construction company resulted in a $750,000 lawsuit to recover lost revenue.

International aid charity Oxfam’s reputation suffered when a director and staff were accused of sexual misconduct, bullying and harassment in “the Haiti scandal.” For a nonprofit dependent upon donations, the bad press had an immediate financial impact. A poll by Third Sector found more than 60 percent of people were less likely to donate to Oxfam afterwards, and four percent of the organization’s long-term givers cancelled subscriptions.

Oxfam also lost volunteers in its shops, on the streets and in the disaster zones where it operates. For an organization that requires volunteers rather than employees, this loss had significant repercussions.

A bad reputation certainly affects staffing, a major percentage of any company’s costs. Reputation risk undermines employee retention and make it hard to recruit new talent. According to a CareerBuilder survey, 71 percent of U.S. workers will not apply to a company with negative press. This increases staffing costs which affects operating margins. Poor publicity can drive away your best employees and create a talent vacuum.

While you might retain valuable team members, you could end up paying them 20 percent more because of a poor reputation. Research by the Harvard Business Review with ICM Unlimited found that a company with 10,000 employees and a bad reputation could be spending $7.6 million in additional wages to counter it. That’s around $4,723 per hire. Replacing them is also expensive—according to a Center for American Progress study, it costs $10,000 to replace an employee earning $50,000 a year.

Executives are impacted, too. A study in Harvard Business Review found that executives from scandal-tainted firms are paid six percent less, on average, than peers. For financial-industry executives, the “scandal penalty” rises to ten percent.

Step Three: Look at How Rankings Reflect Reputation and Revenue

A 2018 global study by London-based Pentland Analytics, Reputation Risk in the Cyber Age, study compared UK telecommunications firm TalkTalk with US home-improvement retailer Home Depot after they were hacked. TalkTalk lost $1.4 billion in market cap—a third of its value—in the year after it was attacked, while the industry rose around 10 percent. Home Depot gained $30 billion (25 percent), significantly outperforming the S&P 500 in the 12 months following its data breach. The difference had to do with how each company handled their event.

Step Four: Tally up the Aftermath

How a company determines the severity of reputational impact and responds to it definitely impacts the financial hit to its reputation. Failure to clearly communicate with stakeholders about the situation, the inability to halt negative media coverage, and/or the lack of an effective and immediate response can result in longer-lasting damage to a company’s reputation, which may ultimately cost enormous sums and many years to rectify.

Skillful management makes a big difference in market perceptions after a negative event. The Pentland Analytics study analyzed share-price fluctuations of 125 companies during the calendar year following a reputational crisis. It found that companies recover from share-price losses after a crisis faster when senior management communicates with stakeholders swiftly (and globally, if relevant)—and if the company launches an active program that directly addresses the damage associated with the crisis event.

Highly responsive companies gained an average 20 percent in market value in the 252 trading days after their reputation crisis, while less proactive companies lost an average 30 percent.

Keep in mind, reputation deals with perceptions—different perspectives, agendas and opinions makes for subjective territory, depending on stakeholder priorities and expectations. For example, employees may be happy about across-the-board wage increase, while investors may be less so.

The important point to keep in mind when assessing the cost of a bad reputation is, who are the stakeholders concerned—and how much of a priority do they consider a topic to be?

Contact us to discuss your company’s reputation—good or bad. The conversation is free. Now that’s worth the cost of a better reputation, yes?